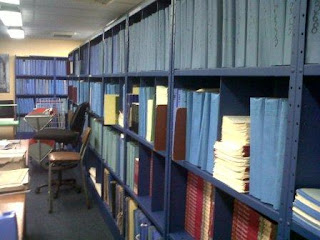 Daniel Neal from the Cape Philharmonic Orchestra Library sent some more vignettes to the SABC Music Library, and gave his kind permission for us to publish.

"In 2004 I was playing for the first SA production of Phantom of the Opera and as such I was privy to lots of comments from the conductor and production team.  They had reservations about one of the girls cast as Christine, the character that is sweet and totally innocent and more than totally devoted to music, but underneath has a sensual and passionate romantic streak.

They said more than once that this actress didn’t really display the latter, and their repeated comment was “she’s too much like a librarian”.

I was by then three years the CPO librarian, and I didn’t take that too kindly.  But it is true that librarians, even of the orchestral kind, are subject to an occupational stereotype that is probably universal.  Why?

Perhaps it is that our occupation is one of almost complete service?  If you consider what we do in general, it’s that we provide, upon request, materials, information and advice, without a transactional fee being attached.  It’s as far removed from sales and marketing as Cape Town is to Alpha Centauri."