The drama addresses social issues in the community and also educates the listeners on health matters. 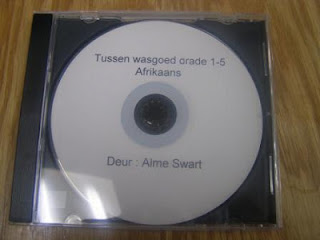 The script writer Alme Swart was exposed to the San communities since her birth as her parents were teachers at Schmidtsdrift San Combined School. It was not easy to start with the script she said. She had to drive through the community to get the feeling of the kind of living of the San Communities.

The youth of Platfontein are very passionate about educating the people of Platfontein through their drama message. The drama is the most listened to on the station and is aired every Wednesday after the 16:00 pm news with a repeat on Sunday at 12:00 pm.


“Ek voel sommer jonk hier tussen die kinders," says Ouma Geel. (I feel very young here with the young people.)
She’s the only N/u speaker among the Afrikaans speaking youngsters. She translated the character of Charlene, the widow, and Juliet’s best friend in the N/u language.
"Ek is so bly dat die Here my gespaar het om vandag my taal op te neem vir my afstammelinge," was Ouma Geel’s words. (I am so glad that I was saved to record my language for my descendants.)
She also does part-time translations in her language.


The production team had the following comments:
It was not easy couching and mentoring junior actors who do not have a drama background. The SABC team had to sit in at their rehearsal sessions. They started recording this drama in Afrikaans at Platfontein. After they met with the Kalahari actors who only speak Afrikaans, they had no other option but to change the one of Platfontein in the two languages of Platfontein which is the !xun and Khwe.

They had to work extremely hard to accomplish this product, especially with the editing part.

Special thanks to the SABC for the equipment and SASI for the CD's to get this product to the relevant people.
The wish is that we get more sponsorships to run such a project continuously.
Special thanks, as well, to Billies Pamo (Project manager at SASI) for managing the team.

The X-K FM programme producers, Piorro Mushavango and Simon Hasjenda for the excellent promos, and the programme manager, Malton Edburg, for allowing the drama to be on air.
Lastly, Me Regina Beregho of X-K FM, for seeing the value in this drama and her continuous support.

Here is a promo of the drama, in the local San languages:

Posted by SABC Media Libraries at 11:11 AM 2 comments:


Dale Cutts sadly passed away in April 2013.  artSMart wrote a wonderful piece about him, which you can read at http://news.artsmart.co.za/2013/04/death-of-dale-cutts.html.  Springbok Radio Revisited salutes you Dale, and thank you for Adam Kane, amongst other gems.  Our sincerest condolences to his friends and family.  May the memories carry you through.