In 1981 he went to South America to play in the Orchestra Municipal de Caracas and a year later returned to play bass trombone in the National Symphony Orchestra. George is an extremely creative and versatile musician and the compositions on this record deserve recognition.

Before coming to South Africa, he played trombone in the Al Hirt Orchestra, Disneyland Band and the Los Angeles Philharmonic Orchestra.

While in South Africa, he played in many jazz groups and he was a very popular and much respected session musician.

The producers of this recording was Simon Lomberg, Ekkie Eckhart and Fanie van Staden. The record was recorded by Welti Welthagen, and the recording was done in M2, Broadcast Centre, Auckland Park in January 1987. 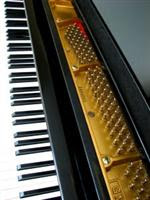 When it comes to western classical music, the first names that anyone can easily shout out are Mozart and Beethoven. Only connoisseur listeners of the music would go further to mention someone like Frederic François Chopin, whom we are paying tribute to this year. Born on 1 March 1810 in the village of Zelazowa Wola, in the Duchy of Warsaw, Chopin was a Polish composer and virtuoso pianist and is famously known for his piano works. Though born in Poland, Chopin immigrated to France due to the Polish November Uprising in 1830.
Extremely talented people usually have something odd we remember them by. Beethoven went deaf, Alexander the Great was apparently an alcoholic, and Schoenberg was terrified of the number 13. Chopin was the one of the frailest people I have ever heard of. Even as a youth Chopin suffered from ill health and showed early signs of tuberculosis – both his sister and father died of this illness. He eventually succumbed to this chronic lung disease on 17 October 1849.
Chopin also requested for his heart to be taken to his home town Warsaw when he died. His sister, Ludwika, fulfilled this very strange request. Some believe he did this due to the fear of being buried alive, so taking his heart out would ensure that this would not happen.
Despite his poor health (which some believe he inherited from his father) Chopin left a legacy that will last for as long our planet exists. A lot of his music has been used in movies, such as The Pianist (one of my favourite movies). Others include Street Fighter: The Legend of Chun-Li; The Curious Case of Benjamin Button (if you haven’t seen this one, go hire it!!); Walk Hard: The story of Dewy Cox; The Prestige and The Contender, to mention just a few. So you may prick your ears when you hear his name, because you are wondering who this man is, but you will have heard some of his music somewhere.
My favourite Chopin piece is his Nocturne in E Minor, Opus 72 No. 1. The music is mellow, tranquil, and melancholic. It reminds me of Beethoven’s Moonlight sonata. It was also used in the movie The Pianist. He wrote this piece in 1827, at age 17. He never intended for it to be published, which is why it was only published in 1855, after his death.
The SABC Music library is proud to have most of the maestro’s compositions, including the Piano Concerto No. 1 in e minor, Opus 11 and Piano Concerto No. 2 in f minor, Opus 21. Virtually all his piano solo works are to be found in the catalogue including the famous Fantasie-Impromptu in C Sharp minor and his Ballades, Barcarolles, Berceuses, Impromptus, Mazurkas, Nocturnes, Polonaises, Preludes and Waltzes.
In addition to all these magnificent works, we recently discovered that we also have his 17 Polish songs, Opus 74, published posthumously. These have been translated to German and include titles like Mädchens Wünsch (The Wish), Frühling (Spring), Mir aus den Augen (Out of my sight), and Das Ringlein (The Ring).
Though Chopin was Polish (with a lot of French thrown in), music was his first language. As one author said, “the piano was his means of communication”. In a letter he wrote to his father, Chopin said “I could express my feelings more easily if they could be put into notes of music”. Therefore, next time you hear an inexplicably beautiful piece of piano music in an ad or movie, it might just happen to be Chopin’s. His “voice” will remain with us forever.
Ignatia Madelane, SABC Music Library
Posted by SABC Media Libraries at 8:17 AM No comments:

Soccer in the SABC Radio Archives

The audio material on soccer within the SABC Radio Archives dates back to the 40’s. We have commentary and interviews from South Africa’s 1947 soccer tour to Australia. The Springboks, as the South African national soccer team was known then, won all the tests on that tour. The audio quality is not good at all but the historical significance outweighs the quality issues by far.

One of the most interesting interviews is with the former South African soccer player, Steve Kalamazoo Mokone. This interview was done by the RSG soccer commentator, Johann Russouw. Mokone was the first black South African soccer player to play for an international soccer club in the late 1950’s.
Those who can still remember the Castle Cup can also listen to the 1964 final between Durban City and the Jewish Guild.
These days the Radio Archives soccer collection has grown a lot and matches are broadcast each weekend. Every match that is broadcast by the SABC is available in the Radio Archives collection shortly after broadcast.
All 64 of the 2010 FIFA World Cup matches will be broadcast by Radio 2000 and most of the PBS Radio Services, and Radio Archives will be preserving each and everyone.
Johann Greyling, SABC Radio Archives
Posted by SABC Media Libraries at 3:11 PM No comments:

SABC Radio Archives at the KKNK

The KKNK Arts Festival was a huge success. The SABC Radio Archives was again presented by Marius Oosthuizen doing the Beiteltjie.
This is the literature chill room of the festival, brought by RSG. Here we played dramas and documentaries out of the Archives and do live radio crossings.

This year we did 7 live broadcasts with interviews, and musicians played live music as well. WOW!!!
-Marius Oosthuizen, SABC Radio Archives
Posted by SABC Media Libraries at 3:05 PM No comments:

I never thought I’d live to see the day in which a Mozart opera would be sung in Xhosa. Nor did I ever expect to see an entire Zulu opera. Yet two works seem to have exceeded everyone’s expectations: The Magic Flute - Impempe Yomlingo, Mark Dornford-May’s adaptation of Mozart’s original work featuring Mzilikazi Khumalo, and Themba Msimang’s Princess Magogo, based on the life of the legendary Zulu princess.


Both these productions went on to receive world-wide acclaim, with Impempe Yomlingo also winning the Oliver award for Best Musical Revival. One critic said one can start a conversation at a dinner table about South Africa and the evening may end without touching the subject of opera, pointing to the fact that when one speaks of South Africa, the subject of opera barely comes to mind. Another mentioned how Msimang's Princess Magogo successfully blended traditional Zulu elements with operatic conventions. Some have described it as an important fusion, a “perfect” union of western and African culture.

Considering the seriousness and the amount of time and work that goes into producing an opera, it is not surprising that these works received so much attention. However, I would like to point out the fact that the important fusion or “perfect” union that is spoken of is not a new phenomenon. The practice of blending elements from two or more different cultures is as old as mankind. From vaudeville, minstrels, jazz to today’s house and kwaito music – even the popular music we listen to every day also came about in this way. Musical genres such as marabi, kwela, maskanda (with artists such as Phuzushukela, and Ihashi Elimhlophe), mbaqanga (popularized by Mahlathini and the Mahotella Queens), and isicathamiya (popularized by Ladysmith Black Mambazo) are all marriages between Western and African cultures. Even kwaito, house, and hip hop, are all a blend of South African elements with European or American musical elements.

It is easy to brush popular music aside and not think about the meaning it carries, I suppose because we are so accustomed to it. However, I am glad that we have reached a point where operas can be South Africanized because then we can see the meaning that the work carries and strive for what it does, that is, for a perfect union between Africa and the West.


The recording was done in M1 Broadcast Centre, March 1986.

Jan de Jong handled the recording, and Daphne Kramers was the producer.

This recording was re-mastered on the 20th of April 2010.