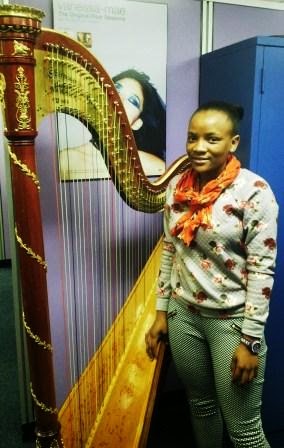 Jacqueline Wilson is the new music librarian at the Music Library. She has been at the SABC Music Library for 2 months.

Please tell us a little bit about yourself. (Where you grew up, where and what you studied and your work experience before you joined the SABC Music Library?)

I was born and raised in then North West in a small town called Zeerust. I started my schooling in 1997 and matriculated in 2009 from Hoërskool Zeerust. I enrolled at the University of Pretoria (Tukkies) in 2010 doing my Bachelors of Information Science. I completed my degree in 2012 and graduated in record time in 2013. My work experience started with me doing some vacation work in retail stores but for my field of study it has been at the SABC where I started my internship in the Information Library of the SABC in 2013. After completing my internship programme I had a break where I started looking for something more permanent and I successfully landed the job at the Music Library.

Tell us more about your collection and the scope of material you need to preserve.

We have a vast amount of material in our collection, where our biggest category is the orchestral collection. We then have some vocal scores, light music, chamber music, choral music and voice and piano. Everything that we have in the library is worth preserving. Some of the material we have is still in the handwriting of the composer and/or we are the only library that still have it. 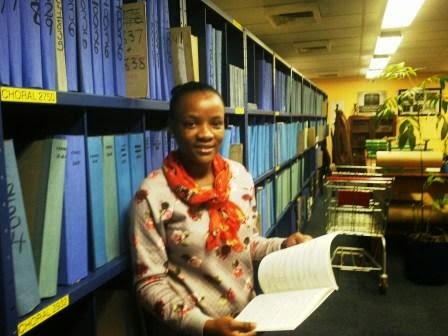 Please tell us about a normal day in your office. What material do you give priority to?

My day starts at 08:00 till 16:30. I start by checking emails and if there are any queries. Currently we are looking at importing to a digital platform, so I also do some research on what other music libraries use so that we conform to a standardised form of cataloguing. Our priority now is the orchestral and vocal scores because they get requested more often by clients. We want to start ingesting them into Inmagic as it will save us a lot of time and help us being able respond promptly to clients' requests.

Do you struggle with technical difficulties, and if so, what?

If you have an anecdote about a specific piece of interesting music or musical instrument, please share it with us.

Getting to learn more about the instruments and even material is something that I cherish. The one story that always comes to mind is the Steinway Piano we have in the M1 studio. I got to learn that the piano actually has a life support system underneath it. The life support system is actually a humidity control system which keeps the piano in tune and prevents damage from climate changes. What happens is water and some form of chemical used for piano life support systems is mixed together and poured into the piano through a pipe which keeps its piano’s tune in place. This was such a fascinating discovery. And that piano is just beautiful!

Tell us why you enjoy doing the work that you do.

I love that I always learn something new every day. I love music and apart from not being that familiar with the classical music genre I am still very much open to new adventures. I also love what I do because I am able to learn how to play an instrument or two as well.

Blog post and questions by Karen du Toit
Posted by SABC Media Libraries at 11:08 AM No comments:

Interview with an intern at the SABC Polokwane Media Library: Simon Mabetlela 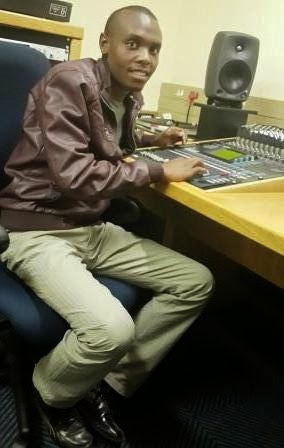 SABC Polokwane has acquired the service of Simon Mabetlela, a qualified librarian.

The intern will be here for couple of months to acquire valuable skills, but also to help with the workflows at SABC Polokwane Media Library.


Please tell us about your personal history as well as your studies. How did you become an intern here at SABC?

I am Simon Thapedi Mabetlela from the Ga-matlala district. I started my primary studies at Nare Mohlalerwa School in Ga-Sebotse Village and therefore went for my secondary studies at Mokateng Secondary at Rosenkraans Village. I then furthered my tertiary studies at the University of Limpopo, where I did BA Media studies and a Post- Graduate Diploma in Information studies. I am now holding an intern position at the SABC Limpopo Combo’s Media library.

I am involved in the processing, preservation and retrieval of historical material which is of importance to the public. These processes includes selection, editing, cataloguing and recording audio clips onto compact discs. I also assist in the books section where I help clients in accessing their desired books. Other functions include shelving and assisting within the record library in searching records for patrons and attending to internal and external enquiries.

I have learnt many things, including work ethics and professionalism, communication skills and team work, and usage of library automation software systems.

The internship helps in co-relating theory into practice and provides me with much needed experience. It helps me to translate what I have learnt at school into practice. It puts me in a working environment and makes me to explore the work sphere and apply my career related functions at large.

I would like to finish my internship programme and hopefully be absorbed for a permanent position within the corporation.   I really want to grow within the library and information management field as it is within my field of study.

- Interview with a student at SABC Polokwane Media Library

- Interview with an intern at the SABC Information Library: Veronica Machate

- Interview with an intern at the SABC Information Library: Agrineth Mashile


Blog post and questions by Karen du Toit
Posted by SABC Media Libraries at 9:59 AM No comments:

Interview with a student at the SABC Polokwane Media Library 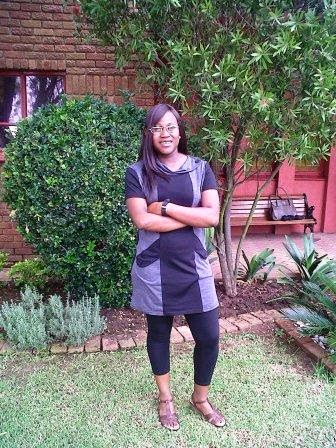 SABC Polokwane has acquired the service of student Surprise Phadu, busy with a Bachelor of Information Science (BINF).
The student will be here for five weeks to acquire valuable skills, but also to help with the workflows at SABC Polokwane Media Library.

Questions are asked to understand the type of skills that she has to offer, but also to get a better understanding of what she is doing at SABC Polokwane.

Please tell us about your personal history as well as your studies. How did you become a student working here at SABC?

My name is Surprise Phadu, a registered student of the University of South Africa. I am a final year student in the field of Information Science. I came to SABC to observe the working environment within the media library and to know what is happening within the profession.

What does your job as student entails here at SABC?

My position was to observe the processes with regards preservation and acquisition of the SABC material. I rotated through all the sections within the Media Library; from Archives, Acquisition, the Book Library to the Circulation desk. I have also made use of various systems and have increased my knowledge in the field of technology.  Now I know the responsibilities of the information librarians and archivists within the profession and  I am hoping to come back for an internship in the future to get hands-on training within the field.

I have learned what is required from an Archivist and an Information Librarian, and how to work with different library users; the internal and the external clients. I had gained priceless experience within the Media Library and the knowledge I acquired I will not get  anywhere else. It has encouraged me to build on it in the future.

Tell us of any interesting anecdotes with regards to working at SABC Media Library in Polokwane?

The interesting part of working within the Media Library comes with the use of various systems and the technical part of it.

I am planning to visit the SABC in Auckland Park to broaden the knowledge I have at present and I am hoping they won’t deny me an opportunity. I told myself that this is the beginning of a long journey to the profession in Information Management.

Posted by SABC Media Libraries at 11:30 AM No comments:

Interview with an intern in the SABC Radio Archives: Akhona Quwe 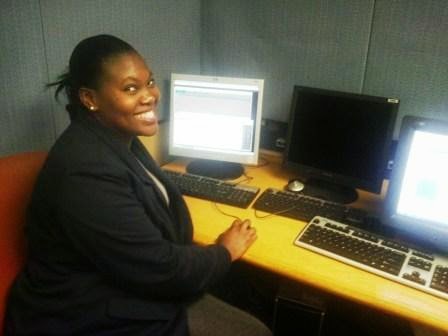 The intern will be here for 8 months to acquire valuable skills, but also to help with the workflows at SABC Radio Archives.

Questions are asked to understand the type of skills that she has to offer, but also to get a better understanding of what she is doing at SABC Radio Archives.

Please tell us about your personal history as well as your studies. How did you become an intern here at SABC?

I grew up in family with quite a number of children; from my twin, to our brother and sister who are also twins. I was born and raised in Eastern Cape where I studied and passed my matric. Becoming an intern was quite a process to acquire in-depth knowledge about the operational workings at the SABC. I first become a learner in Port Elizabeth and after a period of internship, I was  recruited in the SABC Radio Archives.

Ingestion of sound from backlog mini discs to Dalet, labeling of CDs and DVDs, recording on Wavelab , and editing on Dalet and Wavelab.

How to ingest sound in the archives and how to label CDRs and DVDs.

Tell us of any interesting anecdotes story with regards to your internship.

I am quite reserved but I do visit people to seek assistance when I get confused but as for any funny stories I have not experienced any yet.

To get a job as an archivist and to further my studies.

- Intern in the SABC Radio Archives: Mbali Jzele - an interview

- Interview with an intern at the SABC Radio Archives: NOKUTHULA MZELEMU

- The value of internship in the SABC Radio Archives

Posted by SABC Media Libraries at 11:37 AM No comments:

Photos shared by @SABCRadioArc on Twitter for National Archives Week

The following photos were shared on Twitter during National Archives Week in South Africa.

Photos depicting our different collections, as well as the different audio storage mediums in the radio archives:

Posted by SABC Media Libraries at 10:06 AM No comments:

The SABC Radio Archives have been busy with requests for the South African National Elections 2014 this week, which culminated in voting day on 7 May.
It is the same week of National Archives Week from 5 - 9 May 2014.

The theme for National Archives Week is:

“Archives for Democracy, Accountability and Transparency”.

The SABC Sound Archives preserves material for the following reasons (copied from the SABC Media Libraries website) - which addresses the theme of this week perfectly!

Obakeng Phiri, Sound Restoration Archivist, found the following clip from 20 years back - our first democratic elections in South Africa in 1994.


With the 2014 elections, the SABC Radio Archives are especially busy during this time with requests about the first democratic elections in South Africa in 1994. This clip is from a report by Angie Kapelianis in 1994 and Nelson Mandela saying that the first vote is a great moment in South Africa.

The SABC Radio Archives is part of the SABC Media Libraries, the information hub for audio and printed material relating to the South African Broadcasting Corporation (SABC), the national broadcaster of South Africa.

Posted by SABC Media Libraries at 9:56 AM No comments: