The annual LIASA Conference was held at the Birchwood Hotel and Conference Centre, Ekurhuleni, Gauteng on the 22-26  September 2014 .
The theme of the conference was ”Celebrating Libraries  in 20 years of democracy: continuing the dialogue”. 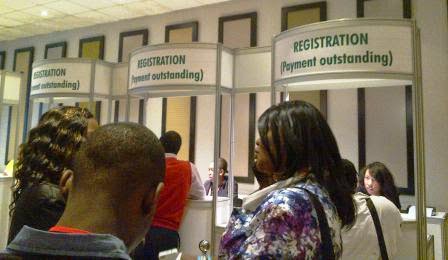 The conference in its 16th year was celebrated for the achievements and the trials still faced by the profession, however the achievements served as an indication that what LIASA is trying to achieve is of vital importance to the library profession in South Africa and Africa as a whole. 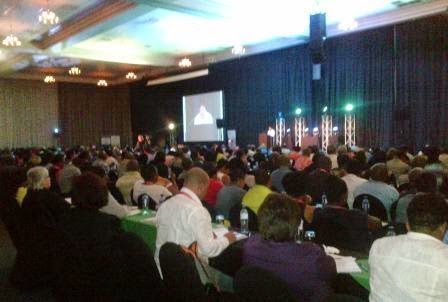 The key address by the outgoing president of LIASA Ujala Sagtoor touched on how LIASA was created as a platform to allow librarians to engage in relevant, articulate their opinions, raise concerns and affirm their roles through networking in order to collaborate, initiate innovative dynamic libraries and services which can contribute towards the development of an informed nation.
She also encouraged all delegates to select the papers and sessions carefully during the conference in order to have a varied learning and insightful experience.

The session touched on how the German Government together with the organisation called the Stiftunlesen started a programme throughout German schools to encourage children to be exposed to the culture of reading at an early age.
The programme was divided by two where consultants would visit hospitals and doctors rooms to hand out pack of books to babies from 6 months and 1yr olds upon their antenatal visits, these books would be chosen according to their development stages. The second phase would be visiting children in kinder-garden , public libraries and Grade 1 learnersfrom as early as 2yrs and older to hand over packs of books for first time registration.

The programme was designed after it was discovered that in rural parts of Germany don’t have access to books due to poverty and high rise of unemployment.  Their national stats indicated that Germany has 10 000 Libraries and out of those libraries only 20% are school libraries and in those 20% of school libraries 5% are appropriately equipped Libraries. With the budget of 471 million per year only 17 million of those communities are active users. The current state of reading behaviour is that 7.5 million in Germany are functional illiterates ranging from the ages 16 to 65 years, however the programme also initiated campaigns throughout Germany to  have what they call “Read aloud Campaign” where children and communities around have activities where they encourage each other to have reading sessions according to their age groups.

The study that was done by above mentioned researchers from Fort Hare Universities on the impact that South African Public Libraries has on the youth in Kayelitsha (Cape Town).  In the study it was discovered that the youth around the area are not active users of libraries; mainly of the perception that libraries are for old people who are bored and have nothing to do. The youth are of the perception that social media is the only way to go in terms of research and the easiest way to access information and therefore the need to visit a library is costly rather buying airtime and downloading information on their mobile phones.

The rate of unemployment and poverty poses a challenge as 1 in 6 youth they don’t have means to visit public libraries mainly on the location and the outdated collection of books and systems available in the public libraries. Another argument from the youth was that the library hours were not favourable and clash with their studies and also that the culture of reading in the township is low due to the fact it has high rate of illiteracy.

The researchers went further to say that during their research they encountered difficulty in trying to engage on the topic with the youth in the area and tried having activities around the area to promote a culture of reading and involving youth to start visiting their public libraries but the results proved to have no benefits both for the study and the youth.

It is a common problem not only to the rural parts of South Africa but even urban black townships that the Department of Education needs to address urgently. The lack of resources and out-dated systems seems to be common among black townships compared to white dominated public libraries and school libraries.

Response from the Deputy Minister of Arts and Culture Rejoice Mabudafhasi.

The South African Government together with the Department of Arts and Culture acknowledges the challenges that are facing black communities regarding public libraries and that even after the country has celebrated 20 years of democracy, high rate of illiteracy among black is still a challenge. “The biggest challenge is not only that people are not educated but the affordability of books in black communities poses as a great concern to the development among the youth and  black families.”
The Deputy Minister emphasised the importance of the dialogue with LIASA, other organisations and publishers internationally and in Africa as whole to find solutions on how affordability on books can be made possible.

The Department of Arts and Culture have embarked on a campaign called “The National Book Week” which is held in September to celebrate heritage month. Youth and primary schools learners within black communities hold activities where storytelling and indigenous languages are being celebrated amongst the school learners, sessions are held in their school libraries and public libraries.
This will be an annual event were progress will be monitored by the Department of Arts and Culture to ensure that the culture of learning is promoted among black communities. Mobile libraries were launched on the rural areas such as Limpopo, Mpumalanga and Kwazulu -Natal during the heritage month to encourage the children to form book clubs and promote a culture of learning at a tender age. A competition was held for 2nd year students in universities by Drum Magazine together with Department of  Arts and Culture. Students had to write about “Celebrating 20 years of Democracy” and what it means to them and the Winner was Ms Sibongakonke Mbatha  from the University of Kwazulu-Natal with a grand prize of R35 000.

Personal feedback from the sessions.

Although there were other sessions that I attended, the most uplifting moment was when Phillipa Mitchell (CEO of Red Pepper Books) spoke to the delegates on the topic “Librarians as Inspired readers instead of custodians of Knowledge’. She touched on a very important point and that is, as librarians we are not only custodians of our collections but we offer refuge to reluctant readers, surprise super readers and create a sense of community and belonging for everyone.

Another session was when the National Librarian Prof Rocky Ralebipi-Simela gave an inspirational address about personal growth within the library profession, how she was once an ordinary librarian to become a National Librarian, she informed the delegates about the dialogue that is taking place between the government , IFLA  and LIASA about the challenges and benefits that libraries has for our society, on the agenda of their dialogue was the revised-remuneration packages for librarians in public libraries and other services, the increased new budget for the Libraries which is about 3 billion for the year 2014-2015 which will enable government to restore and build more libraries in our communities.

The last informative session was on the topic” Teaching and learning of cataloguing and classification modules: experiences of lectures and students at the University of Limpopo”.

There seems to be a major problem with students when it comes to classification and cataloguing, students prefer to copy catalogue than follow proper cataloguing standards and procedures. Students coming for an in service training are encouraged to follow AACR rules during the requested period. In making sure that the correct classification and cataloguing is followed by our interns a three months period must be done before other duties that are available in our different institutions or library services to serve as a basic training for them.

Visiting the exhibitors was a much needed experience. I visited the books stalls to see what collections are available to improve on our library collections; my most urgent interest on the stalls was seeing the technology that is available in monitoring and securing our library collections. I have observed that improved technology in stock-taking devices is much needed for our library; another device/system was the loaning and issuing machine which allows library users to loan and return books independently, all they need to is be registered members of our library which can assist us librarians in doing other tasks that are much more urgent.

Social events were a treat where networking enabled delegates to mingle and share work experiences. It gave us the platform to inform other delegates about our library and also to gather information that may assist in future in our line of work.  The Gala dinner was the highlight of the week. Each year these awards are held to encourage librarians to participate and nominate their colleagues on the outstanding job they may have done during the year.

On a personal level, I have gained a lot of knowledge while attending the conference and would appreciate it if our management would support us in attending the conference on a yearly basis to give us a chance to learn and share experiences in our field, to improve on how we render services to our clients and also for personal development. It gives a broader understanding about our duties to our society.


On the logistical side from the SABC, I would say we need to take pride in how we arrange for our staff to attend such conferences, the brand of the company must be considered when doing arrangements as miscommunication and improper planning gives us a bad name. Our training department needs to plan with us in advance to choose the conference’s sessions, however I am grateful for the opportunity that the management has given me to attend the conference and would encourage my colleagues to attend in the near future.