Remembering SAN heroes who died in the war (SADF)


Moshe Maghundu reporting about the ceremony at Platfontein for the 31st Bushmen Battalion (which became 201 BN) at Omega Base Headquarters:

"For the first time in history, the affairs of the Khwe and !xun of Platfontein have been given recognition. I would like to thank the organisers and the involment of the SA Army for the contribution they made to this day."

"The activities included  traditional dance and veterans who are still alive were dressed according to tradition while others wore the same the uniform  of the old 201 BN, Omega."

"The white contingents also came to celebrate with us, and thanks to all those who came from Cape Town for the day." 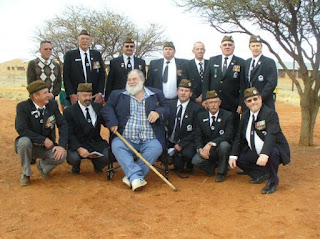 "The names of the soldiers will be remembered by the Obelisk that was unveiled." 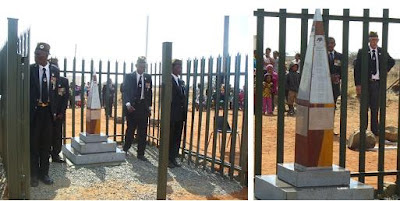 "The military base Omega is not beautiful as it was. It is being vandalised, but apparently the government has new plans for the new Omega."

"Chief Kamama Mukua was there to witness the day as he himself was also in 201 BN.

The day was a very emotional day as we remembered our friends, uncles and fathers who died in the war between SA and the PLAN (People’s liberation army of Namibia).

The day was celebrated with mixed feelings as it opened up old wounds for some.

SABC News Kimberley and X-K FM was there to cover the whole event.

The communities of Platfontein,!xun and Khwe came in a large numbers."

"The traditional dance groups started off with a typical SAN value which is very precious; the making of the fire with a stick which are called "bushman magic."

"A significant event was the hoisting of the flags; the old 201 BN Omega flag and the South African flag."

"This day will be remembered and celebrated each year on 15 September, a fitting reminder of our collective heritage."