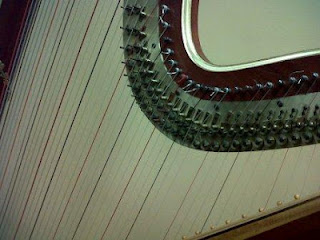 "The CPO Library is a rather complex entity, a partially combined form of what had been the CAPAB Library and the CTSO Library that was a result of the merger in 1997 of the then two orchestras of Cape Town.

On taking up the post of Orchestra Librarian in April 2001 I was immediately lost and often plagued with questions of availability that I was unable to answer; the worst of these coming from people who wanted to know if I had such and such an aria from such and such opera.  Or worse, often a query stated as “you know, THAT aria, for a tenor, I think… maybe Verdi?”

As it was not quite Hell, but bordering on it, I thought it appropriate to put up a few lines in the plaque that is on the front door.  In Italian, for the benefit, mostly, of those who need arias by yesterday, the lines are from the Divine Comedy. As Dante passes through the gate of Hell, he sees an inscription, the final line of which is the famous phrase

To date, not one of the opera aria demanding sorts have ever noticed this, let alone considered and commented upon it."