23 Mobile Things - There is always something more to learn

For those who are interested to use their mobile smartphones or their tablets optimally, or who wants to know how to get into the world of social media, this is your chance!

The Australian and New Zealand librarians have teamed up to make it possible through the 23 mobile things course by Jan Holmquist.


The best news! You don't have to be from Australia or New Zealand to take part in this initiative.
You can sign up from anywhere in the world!

It is also a free course!

They are starting this week with introductions and with a quick survey to measure what is being learnt.

It is also never too late to start participating in this course.

All that is needed is to sign up with a name, email and country. As easy as that.
You can also follow the course on your computer or laptop.

The course will run from May to November 2013, and each week will cover a mobile Thing to master as set out in the original 23 Mobile Things blog


Your most pressing questions about the course are addressed here: FAQ.

The timetable is available: Timetable

Blog post by Karen du Toit, Archivist in the SABC Radio Archives, who will be taking part from South Africa. 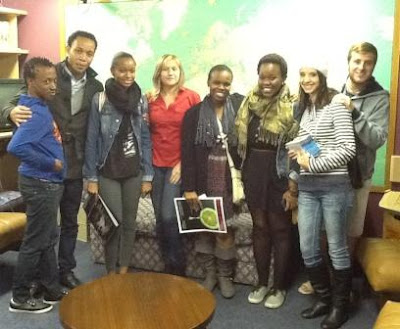 Third year drama students at the University of Pretoria, doing a course in Radio, visited the SABC Radio Archives on Friday.

The tour was organised by their lecturer, Anna-Marie Jansen van Vuuren.

More of the photos of their visit can be seen on the SABC Radio Archives Facebook page.

They were shown the different analogue and digital audio formats which are being archived and handled in the SABC Radio Archives on a daily basis.

Although the audio equipment and the audio formats are not being manufactured or used on a massive scale any more, the archives are still in need of the skills of capable technicians who look after the equipment.
It is also the task of the archivists to look after their collections of  different audio formats, and to identify the need of collections becoming obsolete because of the formats disintegrating, such as the mini-discs.


The reel-to-reel-tape machine was demonstrated, as well as how the format of reel-to-reel tapes was one of the much safer and robust audio carriers, even than more recently released and recorded audio formats.

Drama Students visiting from UP

Posted by SABC Media Libraries at 12:52 PM No comments: Links to this post

Archivist and librarian Moshe Maghundu, was at the land claims' discussions between the Minister of Rural Development and Land reform, Min Gugile Nkwinti, and the Khoi and San people.
They want to re-open the lodgement of the land claims.
It was held on 13 - 14 April 2013 in Kimberley.


As an archivist, Moshe Maghundu tries to be at any event with regards the issues and culture of the Khoi and San people; to record and gather material for the archives, which he has started from scratch at SABC Platfontein.

One of the issues at the heart of the Khoi and San people, the land claim, was once again reopened by the minister. A meeting was organised in Kimberley at the Mittah Shiperepere convention centre. The deliberations during these two days were very difficult.

The San demanded an immediate solution to the following:

• The land should be given back.
• Heritage site ownership should be awarded to the Khoi and San.
• Acknowledgement for their traditional leaders and chiefs should be given.

The Khoi and San at the meeting also demanded that government should consult with them before they start planning and implementing with regards their issues.

The following promises were made:

• PANSULP - that the Khoi and San language be nationalised and included in the S.A. school curriculum.
• Recognition of Khoi and San leadership..
• A Khoi and San committee or steering body to be elected to represent them.

I had the privilege to speak to some of the government officials who was very positive in their response. The government acknowledges that mistakes were made when land were taken away from the San peoples (in 1913). After years of government research on this issue, the government want to correct all the wrongdoings. They reopened the land claim issue after it was finalised some years ago as it did not take the Khoi and San people in account.

SABC station X-K FM (107.9) was there for the two days to broadcast from the venue.
Afrikaans was the language at the conference and only a little bit of English was heard. The recordings was made in Afrikaans.

At some point the frustrations of the Khoi and San made the government delegates uncomfortable. The wisdom of the Minister steered them through this difficult hurdle.

It needs mention that the Khoi and San land claim re-opening came from the speech President Jacob Zuma made in Parliament. We as the San thank the government for giving us a voice.

The X-K FM team is acknowledged for a job well done. They had to broadcast in a situation where people were shouting and making noises.
This is what the station is tasked with: To cover all affairs of the San peoples and to communicate it to those who could not attend.

The final day ended with entertainment and a gala dinner where the SAPS band
occupied the stage.

Posted by SABC Media Libraries at 11:44 AM 2 comments: Links to this post

A quick peek in the SABC Audio Restoration Section - I am holding... 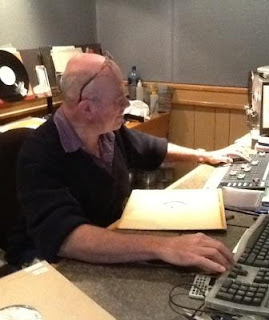 
At this moment he is working on… 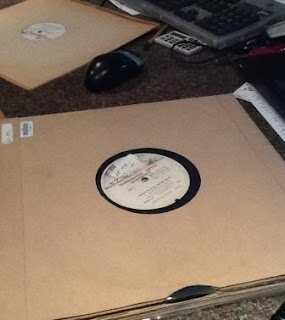 ... a collection of LP records, that needs restoring.
I will clean the LP first, then record it into my computer, restore the audio and then I transfer the audio to a CD. 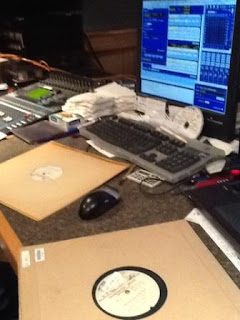 I follow this process for every LP that will be transferred to CD.


Blog post by Karen du Toit, Afrikaans Archivist in the SABC Radio Archives.
Posted by SABC Media Libraries at 11:45 AM No comments: Links to this post

A quick peek in the SABC Radio Archives: I am holding... (Channel Africa) 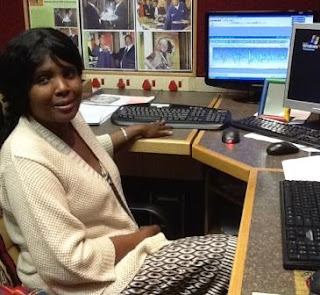 A series of blog posts highlighting the scope of our collections.

Elizabeth Mate is the Channel Africa Archivist in the SABC Radio Archives.

She looks after the collections of Channel Africa Radio. It includes various languages, English, Portuguese, Swahili, Chinyanja and Silozi as well as French.

At this moment she is working on…

I am cataloguing an interview of Mr. Kachana Kachana of the Silozi Service who is speaking to Professor Patrick Walusiku Mataka of Zambia about the importance of trees/forests in the world..


Posted by SABC Media Libraries at 12:08 PM No comments: Links to this post

Our late hero, Oupa Dawid Kruiper, had been fighting for a very long time for development around Andriesvale.
He was a San elder and leader of the Khoisan community in the southern Kalahari Desert. He was also one of the main players in the land claim by the #Khomani San. He died in June 2012, and the burial service of  Oom Dawid Kruiper was recorded for the archives as well.

One of the major problems was not having drinking water sources. The community had to dig wells to get water. After his death, and media coverage of the challenges the communities face , his dream about running water became a reality.

The team visited the family during the Kalahari Desert Festival.

Poverty remains the biggest problem for these people. They struggle each day for food. As Bushmen they still try to survive from the Kalahari sand dunes, which is not an easy thing to do.
A positive development by the government is that the team of SASSA (social grants) is actively involved by registering the people around Andriesvale. We saw them working there, and we thank the government for their involvement and the good work of the acting premier of the Northern Cape.

I thought it will be good to take a photo with the Kruiper family as their issues of poverty has touched my heart. The hope remains that their problems would be addressed!

I told the X-K FM team of the water issues before we visited, and when they saw the tap, they all were very happy to see it!  (See photo on top) 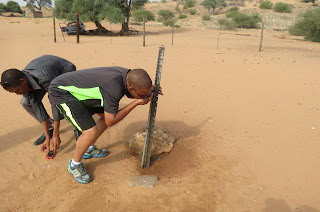 I have been waiting for this opportunity to witness it myself. I visited the house of late Oupa Dawid Kruiper around 25th March 2013. I could see that the water that Oupa Kruiper had been craving for, had finally became a reality.
I could even drink from the tap outside his house.

It is a pity that Dawid Kruiper himself could not witness it, but his family appreciates the legacy he has left behind!

In memory of Dawid Kruiper, tradional leader of the Khomani San

Posted by SABC Media Libraries at 11:53 AM No comments: Links to this post 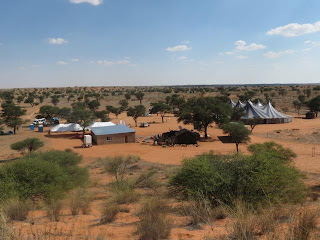 X-K FM radio station covered the “Desert Festival “in the Kalahari.  The Desert Festival was on the eve of Human Rights Day in South Africa on 20 March 2013 at the //Uruke Bush Camp Adventure grounds.
Moshe Maghundu, as the archivist, got the opportunity to go with the crew and do recordings (thanks to William Heath) for the archives.

He is very grateful for every opportunity he gets to collect material for the X-K FM archive, as he is busy building the archive from scratch. Whenever a San-related event is taking place, he has to make arrangements with his managers to be able to go and collect archive material, whether it be audio, photos, arts or crafts.

He writes these blog posts which is an unique way to capture the history and the culture of the San people.

The Acting Premier of the Northern Cape, Grizelda Cjiekella opened the //Uruke Bush Camp, which was part of the official opening of the Kalahari Desert Festival.

Those who attended the festival appreciated her presence tremendously.
The photo on top shows the the outlay of the //Uruke Bush Camp from a distance.


We did a live broadcast from the venue. The challenges included a MTN signal which went up and down, but we as the training personnel discovered that I had to lift up the Comrex while they were broadcasting.
We were surprised to see so many people that came to our tent just to be with us and listen to the languages we use.

It was very interesting hearing all three SAN languages speaking to each other on air.
Left is a Naro speaking person, middle is !xun speaking and right is Khwe speaking. The different languages have some overlapping words, some with different meaning, and some with the same meanings.
We had a very long day of interesting broadcasting.
We made history!
The sons of the late Dawid Kruiper doing their performances, and the group from Platfontein singing for them, being in very good spirit.
The Botswana traditional dance group from  Gantzi is part of a SAN group from Platfontein that I have limited contact with. They performed different dances but we could identify their performances to be the same as those of the other SAN groups. This group had to travel a day long from Botswana to be with their SAN colleagues.
The Platfontein Khwe traditional dance group performed a magical performance while all could shout and sing with them. The audience wanted them to occupy the stage for long,  but time would not allow.

The school choir did an excellent job, which will not be forgotten.

Pops Mohamed made his appearance at the festival. His music career is revered by all.
Every one was waiting to see Pops on the stage. It was well worth the wait!

Posted by SABC Media Libraries at 12:14 PM No comments: Links to this post