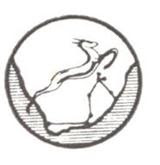 Springbok Radio belongs in the ears of you, the listener’s, the appreciaters of Old Time Radio, and the newbies who can appreciate good radio.


Therefor we are working on exploiting Springbok Radio Material in various ways. Currently we are busy trying to publish a CD with a couple of Squad Cars episodes. We are also looking into publishing The Pip Freedman Show.

Be on the lookout!

How a Phonograph Cartridge Works

A phonograph cartridge is a manufactured electro-mechanical device that tells your entire audio system what’s happening along the half-mile groove that’s cut into the typical analogue disc. The quality of the information provided by the cartridge is a critical determinant of how faithfully any audio system will reproduce the recorded sound.
CARTRIDGE OPERATION 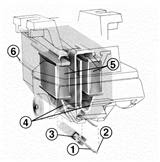 The cantilever (1) is a tube, or bar, with a diamond stylus tip (2) attached at one end, and a magnet (3) at the other (in the case of moving magnet cartridges). The cantilever must vibrate in exact sympathy with the rapid movements of the tip as it traces the audio signal, thereby moving the magnet attached at the other end.

Inside the cartridge body, magnetic conductors, or pole pieces (4), surround the magnet. A coil (5) of pure copper wire wraps around the leg of each pole piece. As the magnet moves, its magnetic field is distributed between the conductors. Magnetic energy flows through the center of the copper coils and produces an electrical signal. This signal corresponds to the original motion of the tip, and is electrically transmitted to the amplifier through terminal pins (6) bonded to the ends of the coils. The amplifier, in turn, drives the speakers.

Because the cantilever is located at such a critical juncture in the signal chain, it has a dramatic effect on the quality of sound reproduction.

MASS
The lower the mass of the cantilever the better able it is to accurately duplicate the sound pattern written on the walls of the record groove. The lower the combined mass of the tip and cantilever (the stylus assembly), the less the chance that the tip will lose contact with the groove, and consequently, with the signal. The greater the stylus mass, the more likely it is that inertia will cause it to skip over signal information as it oscillates rapidly, tracing the signal pattern while the groove walls speed past. This is particularly critical in the high-frequency range, where audio modulations are the smallest and most concentrated, and stylus tip movement is consequently the most rapid.

TRACKING
Tracking is the term used to describe the positioning of the stylus tip in the spinning record groove. Tracking effectiveness is referred to as tracking ability, or trackability. The quantitative measure of trackability was first developed by Shure. It is defined as the maximum velocity at which the stylus tip can move back and forth tracing the audio signal before it starts to skip. This measurement is expressed in terms of centimeters per second. It should be observed at several different frequency levels, while tracking force is held constant.

STYLUS TIP
The stylus tip traces the musical signal inscribed in the record groove, which can contain modulations as small as a millionth of an inch. Tip geometry is a critical factor in determining the accuracy of sound reproduction. The narrower the side, or contact radius, of a biradial diamond tip, the more precise its ability to trace the audio signal. This is particularly critical in the complex, densely packed high-frequency range. The better a tip traces the audio signal, the more accurate the sound reproduction, and the more consistent this reproduction is across the audible spectrum.

FREQUENCY RESPONSE
The consistency of sound reproduction across the audible spectrum is generally described by the term frequency response, which is the range over which the cartridge sound output is essentially level, or "flat" - with fluctuations neither above nor below a reference level on a monitor. Because every manufacturer has its own definition of what the term "flat" means, with some dropping this qualifier altogether, the comparative value of posted frequency response ranges across brands is limited.

TRACKING FORCE
Tracking force refers to the total force holding the stylus in place in the record groove. Effective tip pressure on the record can actually be as high as several tons, due to the extremely small contact area between diamond tip and groove surface. The amount of tracking force is the major determinant of normal record wear (as distinguished from record damage.

Posted by SABC Media Libraries at 3:51 PM No comments: Links to this post 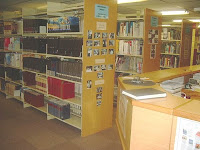 The Newbase system is a software that conducts inhouse internet and press monitoring services.

The newspaper articles can be accessed on the Newbase web and also directly from the Cutting Services in the SABC Information Library.

Opening parliament on the 2nd February 1990, Pres. F.W. de Klerk, in his first speech after assuming National Party leadership, called for a non-racist South Africa, for unbanning of liberation movements and for negotiations about the country’s future. This year on the 11th February 2010, 20 years after the release of Nelson Mandela, South Africans commemorated these events by opening parliament in the evening for the first time in history.

Posted by SABC Media Libraries at 12:14 PM No comments: Links to this post

The SABC Radio Archives is using the Natural Document Management (NDM) System to catalogue our collections of radio and audio material.
I found an old manual of November 1990 that was compiled by the Computer User Services of the SABC.
It states the following:
“Natural Document Management is a Library package with all the capabilities of managing an Archive System. NDM can be tailored to suit the needs of the particular Archives.”
- It was formerly also used to create documents in NDM to replace the old card catalogue. It has been an ongoing process to have all the cards ingested into the NDM system.
- The document contains all the relevant information pertaining to the audio format that has been archived.
- NDM provides methods of retrieving the documents in its database.
(Computer User Services of the SABC)
It is now 20 years later, and with all the advances in the virtual world, it is almost unthinkable that we are still able to use such a system. It is very rigid and cumbersome with regards the cataloguing and retrieval of the information about our audio collections. We store the catalogued material on compact discs (CDRs).
See a screen print of a document: 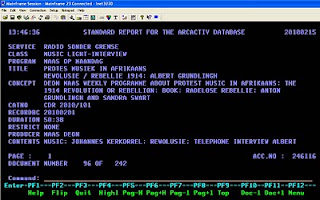 The fact that we are still able to use it, says something for it’s sustainability in the electronic age. Fortunately it will be possible to migrate it to a new system (See the Digital Library Project) in the future. Hopefully it will be sooner than later.
Do you also struggle with old systems, or is it only me complaining?

Posted by SABC Media Libraries at 11:49 AM No comments: Links to this post

The Audio Restoration Section of the Media Library is responsible for the restoration and re-mastering of audio. The Audio is obtained from recordings of local artists, recorded in various SABC Studios around the country, between the years 1950 and 1986. These recordings were made by the SABC to promote local talent, as well as provide local content for broadcast purposes.

Most of the audio is sourced from vinyl records. These are washed, cleaned and then recorded into a sophisticated computer for digitizing, electronic cleaning and transfer to CD.

All the necessary data, e.g. song titles, composers, artists and writers, is captured. We then design covers and sleeves for the CD, which contains this captured data. If necessary, the CD will also be duplicated here.

When the process is finished, the master CD is stored, the duplicates are distributed and the CD is used for broadcasting as and when necessary.
- Maryna Barnard, Bags Farrell, Sound Restoration Unit
Posted by SABC Media Libraries at 1:59 PM No comments: Links to this post