The SABC Radio Archives has archivists who focus specifically on a specific radio station and/or an indigenous language. This is part of a series of interviews where the archivists answer some questions addressed to them about their daily work in the archives.

The Archivist answering the questions is Lucal Mokwena, a new archivist who started in the SABC Radio Archives about two months ago.

She is the archivist for English programmes.

1. Lucal, please tell us a little bit about yourself. (Where you grew up, where and what you studied and your work experience before you joined the SABC Radio Archives)

My name is Lucal Morongwa Mokwena and I grew up in Moletsane, Soweto. I studied BA Audio Visual Production Management at the University of Johannesburg. I am currently studying for a Higher Certificate in Archives and Records Management at UNISA.  I started working at the SABC in 2008 as an intern for Content Enterprises: Operations Department and then for Summit TV in 2010. Before joining SABC Radio Archives in October I worked at Newsclip Media Monitoring for 2 years as a Broadcast Media Scanner.

2. What is your job description?

3. Please tell us about a normal day in your studio. What material do you work with?

I work mostly with material from SAFM (drama, book readings, interviews), a bit of Metro FM as well as Radio 2000 on SABC. On a normal day  I catalogue on NDM, write CDs and create labels. I also do quality checks and schedule programmes for download on Netlog.

4. Do you struggle with technical difficulties?

Yes, I do struggle technically but I have learned that I don’t have to suffer in silence as my colleagues are always willing to assist.

5. If you have an anecdote about a specific piece of interesting audio material, please share it with us.

Since I have started working here about a month ago I have been listening to drama from SAFM and I must say that its not only entertaining but it is quite informative and educational. One specific audio material which I found very interesting is a book reading on the Nelson Mandela Story. I have read his biography before but it just doesn’t get tiring.

6. Why do you enjoy this work?

I enjoy my work because its new material everyday so its not boring.  Also I don’t just preserve material for access but I stay informed on a daily basis.

Posted by SABC Media Libraries at 10:51 AM 4 comments: Links to this post


This is the 4th in a series of blog posts featuring Springbok Radio, the SABC's first commercial radio station, that was broadcasting from 1950-1985 before it was closed.

The visual canvasses are from the most recent UNESCO World Day for Audiovisual Heritage 2012 exhibition at SABC.

One of probably the most popular programs on Springbok Radio was Squad Cars: 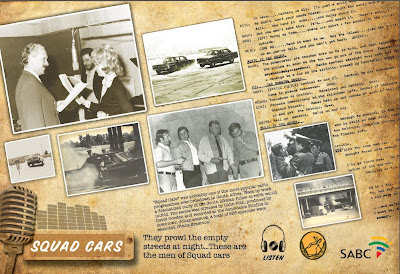 "They prowl the empty streets of night... These are the men of Squad Cars"

"Week by week a dramatized story of the South African Police at work would unfold.
The series was directed by Colin Fish, produced by David Gooden and recorded at the Sonovision Studios in down-town Johannesburg.
A total of 823 episodes were recorded."


Two programmes about Investigation and Trial: 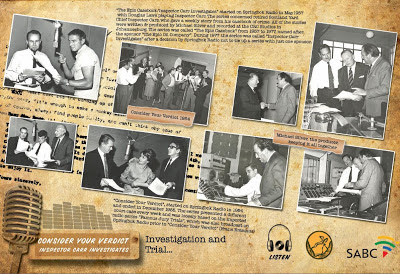 
"Consider Your Verdict" started on Springbok Radio in 1954, and ended in December 1985.

The series presented a different court case every week and was loosely based on the imported radio series "Famous Jury Trials", which was also broadcast on Springbok Radio prior to "Consider Your Verdict".

The series presented a different court case every week and was loosely based on the imported radio series "Famous Jury Trials", which was also broadcast on Springbok Radio prior to "Consider Your Verdict"

The series concerned retired Scotland Yard Chief Inspector Carr, who gave a weekly story from his casebook of crime.

All the stories were written & produced by Michael Silver and recorded at the CRC Studios in Johannesburg.

The series was called "The Epic Casebook" from 1957-1977, named after the sponsor "The Epic Oil Company".

During 1977 the series was called "Inspector Carr investigates" after a decision by Springbok Radio not to tie up a series with just one sponsor." 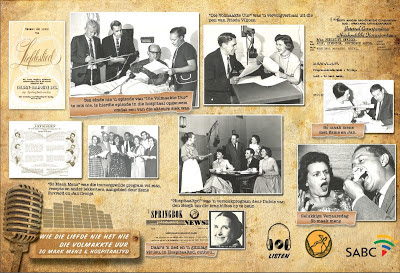 A series of blog posts focusing on Springbok Radio, the SABC's first commercial radio station, that was broadcasting from 1950-1985 before it was closed.

The sound and the memories lives on through the listeners, and through the dedication of the Springbok Radio Preservation Society by way of Frans Erasmus.

This dedication is passionately shared by the Springbok Radio custodian in the SABC Radio Archives, Retha Buys, who took over the collection, and ensure a two-weekly six-hour stream of Springbok Radio gems.

The two following visual canvasses are from the most recent UNESCO World Day for Audiovisual Heritage 2012 exhibition at SABC:

- Springbok Radio was a constant source of news and actuality.


- Springbok Radio also made sure that the listeners were entertained.


The most recent stream includes an episode of the regular comedy Taxi:
Taxi: Agatha & Rupert, by Joe Stewardson (1972/01/23)


Posted by SABC Media Libraries at 2:38 PM No comments: Links to this post

"Springbok Radio was the first SABC commercial radio station. Its lifespan was from 1 May 1950 to 31 December 1985 when it was closed mainly because it was no longer  seen as financially viable following the advent of  television in 1976.

Springbok Radio programmes were uniquely different and fresh, and became people’s companion over the years.  Drama, adventure, comedy, documentaries, variety, and other programme formats kept listeners entertained and glued to the Radio.  Springbok Radio also created a platform for artists and actors to become well-known and loved by the public, and afforded them the opportunity to live out their creativity. Springbok Radio contributed to a wealth of local content.

Unfortunately much of the material was not archived. The reasons ranged from tapes having been re-used to commercial programmes not being seen as ‘culture’ – a world-wide tendency at the time. Since the closure of Springbok Radio in 1985, interest in it by the public has grown and the nostalgic value of "stream" radio has increased over the years."


The most recent UNESCO World Day for Audiovisual Heritage 2012 highlighted the dire predicament of the state of the audiovisual heritage of the world.

This post is the first in a series of posts about Springbok Radio, the SABC radio station material that made it's way back in the archives of the public broadcaster of South Africa after it was "lost"!
SABC Media Libraries most recent exhibition on UNESCO World Day for Audiovisual Heritage focused exclusively on this collection.

The story of the return of Springbok Radio material to SABC is a case in point for the importance of our audiovisual heritage!

"After the closure of Springbok Radio, the Springbok Radio Preservation Society was formed to collect all the relevant broadcast material and to ensure that this element of SABC history would not be lost for future generations. Mr Frans Erasmus was the driving force of the initiative, and he dedicated his life to collecting all things Springbok Radio, either from producers and production houses, or from private collectors.

The SABC Radio Archive has worked closely with the Springbok Radio Preservation Society over the last few years to assist in making the collection accessible to the public.  Since most of the material belongs to the SABC, an agreement was reached with Mr Erasmus to grant him permission to look after the collection, and to make the material accessible via a website and a digital stream.  The SABC in return handled all queries relating to Springbok Radio and ensured that copyright was not violated. In addition, copies of the Springbok Radio collections were submitted to the SABC on a regular basis to be catalogued and added to SABC databases. The mutual understanding was to transfer the complete collection back to the SABC, for preservation and as part of the SABC radio broadcast legacy, while the Springbok Radio Preservation Society would maintain the website and digital stream under the auspices of the SABC.

Earlier this year Mr Erasmus decided to hand over the collection in its entirety (including the website and the digital stream) to the SABC Radio Archives. He agreed to assist with and oversee the process of transferring the digital stream and the website, as well as advising on the preservation of the material and related information.

This generous gesture by Mr Erasmus and the Springbok Radio Preservation Society will bring joy to the lives of many people in future, but especially for those who remember Springbok Radio or who can appreciate a good radio story."

- The story of SABC Springbok Radio via Storify