In Memoriam: Pat Rosevear-Lowe, aka Rosie 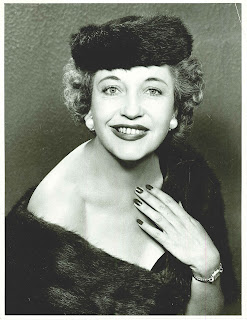 Probably best known as Rosie in "From Crystal with Love", one of the longest running serials on Springbok Radio of old, Pat Rosevear-Lowe will live on in our memories also as one of the first female voiced on South African Radio.

Pat's daughter, Tessa, remembers: "During her career, she worked with names such as Bob Holness, Cedric Messina and Ray Johnson.  Amongst other work, she featured regularly in the "Lux Radio Theatre" and had her own spot called "Dulux Homeowners Club".  She was also in the long running serial "Big Sister", and played Rosie in "From Chrystal, with Love".

Two other recordings that I know she acted in are "Telltale Romance No. 2: Sorry I Sinned" alongside 'Van Doren' and 'Joan Robinson', and "My Redeemer Liveth" (19 April 1946) alongside Cedric Messina, Philip Burgess, Hugh Evans and Dewar McCormack."

The SABC Radio Archives preserves her memory in the form of a recording of an episode of "From Crystal with Love", as well as a recording of abovementioned "My Redeemer Liveth", and "Tales from the Bushveld", as well as her playing in an operetta named "Paganini", adapted by Stephen O'Reilly.

Posted by SABC Media Libraries at 11:59 AM